Close to the Mansion House, Lendal saw the early expansion of the ‘new’ style of building in York around the first part of the 18th century. Commissioned by Henry Baines, an Alderman of the City and Lord Mayor twice (1717 and 1732), no.14 Lendal was built, together with no. 12 Lendal, in around 1714.

Government regulations following the fire of London required buildings that fronted onto a street must be constructed of brick or stone. York City Corporation took up the challenge and so began a great expansion of building projects. This began with the Red House on Duncombe Place, designed by York architect John Etty and completed in 1680.

The cartographer John Cousins produced a large map of the city in around 1722, that showed the homes of all the aldermen illustrated around the edge. Sadly, a number of these buildings have been lost or altered over time, but it is, nonetheless, an important record of the City. No.14 is shown as a three-storey, four bay building matched by no.12 and separated by a rainwater downpipe. The drainpipe you see today, with its decorated hopper and elegant brackets, was a later replacement from around 1774. The Flemish bonded brickwork on the elevation facing the street is also of very fine quality.

During recent restoration by the Trust in 2018, the bricks were repaired and repointed to a high standard and the work is seen as an exemplar for other projects in the city. Each floor is separated by a brick stringer course, a technique designed to throw water off and away from the brickwork and windows below. Most of these windows, both front and back, have segmental arched heads and are, possibly, the earliest examples in York.

At eaves level the cornice is dentilled (small, repeating block design) with plain medallions. However, there are remains of a more boldly modelled cornice of an earlier date visible towards the rear of the building.

The double pitch roof, on the eastern elevation, abuts a shaped gable of English Vernacular style. It is not clear if this is original to no.14 Lendal, but evidence of small bricked in windows in the attic space suggest it might be. At ground floor level the front has been greatly altered by the insertion of a shop front and carriageway, which required the relocation of a fine staircase from the ground to first floor. A small room set into the east elevation also has some interesting World War II graffiti, which has been preserved.

Inside the current shop you can still see some early features, including fielded panels and a heavy moulded cornice at the rear. Also a screen between the front and back areas has been reinstated using a shadow imprint of the original balusters and a surviving panel discovered in the basement.

The basement rooms were originally used as a kitchen, scullery and storeroom, but required major restoration to make them fit for present day purposes . The walls were all tanked (made waterproof), floors re-set on a waterproof membrane and openings, that borrowed light from the pavement above, reopened. The original open arch fireplace had been superseded by a cast iron range supplied by the York foundry of Tomlinson and Walker and this has been restored.

On the first floor all the spaces have their original eight panelled doors with rounded heads. A large room to the front has a fine, late 18th century fireplace supplied by the carver Francis Wolstenholme of York. To the rear, connected through a shared doorway, is a smaller room with its original fielded panels and a replacement fireplace based on profile evidence. Another smaller room in the northeast corner has a fireplace set at a splay.

Off the landing, the stairs and handrail leading to the second floor is a handsome example of a pattern often seen in early 18th century York houses. The narrow balusters are grouped three by three and the carved newel posts linked by sweeping moulded handrails; perhaps taking inspiration from how a rope handrail would behave when tied between posts.

At second floor level some of the rooms have deep moulded cornices with leaf decoration at the angles, whilst above, in the attic spaces, areas for private dining have been created by the insertion of conservation windows and dormers designed by the Trust’s conservation architect Guy Bowyer. All part of a major restoration project that was the winner of a York Design Award in 2019.

No. 14 Lendal has also been the home of some notable occupants, not least John Goodricke, an amateur astronomer who, at the age of 19, was awarded the Copley Medal from the Royal Society in 1783. Before the creation of the Nobel Prize, this was the highest honour the scientific community could bestow.

Another amateur scientist, Charles 5th Earl Fitzwilliam, from Wentworth Woodhouse, had rooms here. In 1831 he was appointed president of the British Association for the Advancement of Science and their first meeting took place at the Hospitium in Museum Gardens.

More recently, for 170 years the saddlers and harness makers Robson and Cooper supplied their wares around the world from the shop. A surviving sales ledger records the likes of the Barons Edward and Robert Rothschild, Queen Victoria’s seventh son Prince Arthur, Lady Chesterfield and John Paul Getty all beating a path to their door. More locally, the renowned fast bowler Freddie Truman commissioned the company make his first MCC suitcase, complete with bespoke gilt lettering.

Today, 14 Lendal is leased to The House of Trembling Madness. The UK’s Independent Beer Retailer of the Year 2019, a craft beer seller with a bar and restaurant. It boasts one of the largest collections of beer in Yorkshire and room for all sizes of events in a splendid Georgian townhouse setting.

Currently operating as an award-winning beer retailer, popular bar and restaurant: The House of Trembling Maddness.

Visit the website for The House of Trembling Maddness →
× 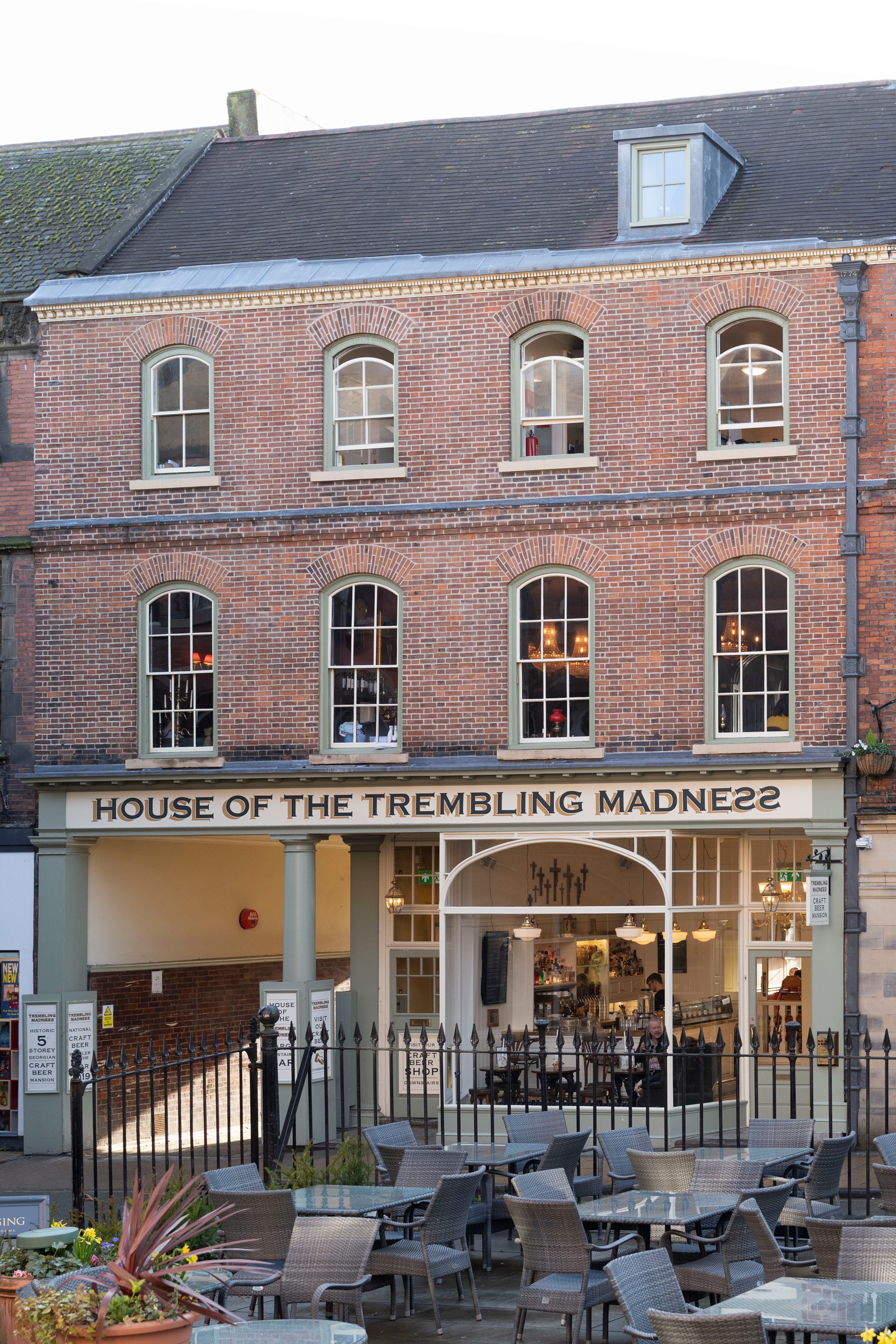