Tudor building on the street of the charcoal makers

This little gable ended two-storey Tudor house was built in the 16th century on the street of colliers. Not the home of coal miners, as you might think. The main fuels in medieval times were charcoal, peat and wood. Coal would only outstrip them by the late 18th century. Originally, a collier was the name given to someone who made and sold charcoal.

In Roman times, the thoroughfare provided an important continuation of the Via Pricipalis, the main road to the Porta Principlais Sinistra, the south-eastern gate of York's Roman fortress. The remains of the gate are buried below King’s Square and you’ll find a dedication stone in the Yorkshire Museum.

If, by the 16th century, charcoal merchants did live on the street, they would not be making their charcoal in the centre of York. For that they needed large areas of forest to coppice trees and fuel their kilns. It’s reasonable to suppose that the nearby river Foss, which, at the time was probably navigable up to the King’s Forest near Sheriff Hutton, and the nearby Hungate wharf, would mean colliers could bring in their charcoal and the street became a centre for its sale.

Number five’s two-storey timber-framed construction, jettied and gabled to the street, has a brick extension at the back, which may be a replacement of an original framed third bay. The house has been restored over time and many of the timbers are modern. The arched head to the main doorway is not original, though the two doorposts and the north-west corner post are.

Colliergate features throughout York’s history. The artist Nathan Drake, perhaps most famous for his paintings of the ‘New Walk’ by the river Ouse, one of which you can see on the Assembly Rooms page, established a painting and drawing school in Colliergate. Sadly, however, with limited success.

In 1788 a revolution in medical care for the sick and poor of York arrived with the opening of the York Dispensary. Superintended by the apothecary Mr Whaley of Colliergate, all medicines and services were free of charge.

In 1801, at number 23 Colliergate, James Kendrew began printing penny histories (also called Chapbooks) and for the next 40 years these little books kept alive the nursery rhymes, fairy tales and adventure stories for generations of children and adults. The likes of Old Mother Hubbard and Her Dog, became classics.

Over the years many different people plied their trade at number five, from paper box makers to artificial florists and general shop keepers. By the end of the 19th century, except for this little house, nearly all the medieval buildings on the street had been replaced or re-faced.

A watercolour by William Boddy c.1900, now in the Darrell Buttery collection, shows, “the building drawing attention to itself, pushing forward beyond the building line and presenting its gable-end to the street.”

The painting shows the render on the outside and, on the right, picks out an original rain hopper head and down pipe, that are still there today. At ground floor level the shop had a bow window and, to the left, the ogee-arched passageway had a door made of broad planks featuring a wicket gate - a smaller entrance negating the need to unbolt and open the whole door, especially at night.

When the Trust acquired the property in 1957 the render was removed, timbers replaced where necessary and, by incorporating the side passage into a new shop front, a larger window was created. Planners today would try to avoid amalgamating passage ways like this, as the loss of independent access to the upper floors restricts the buildings potential future use. 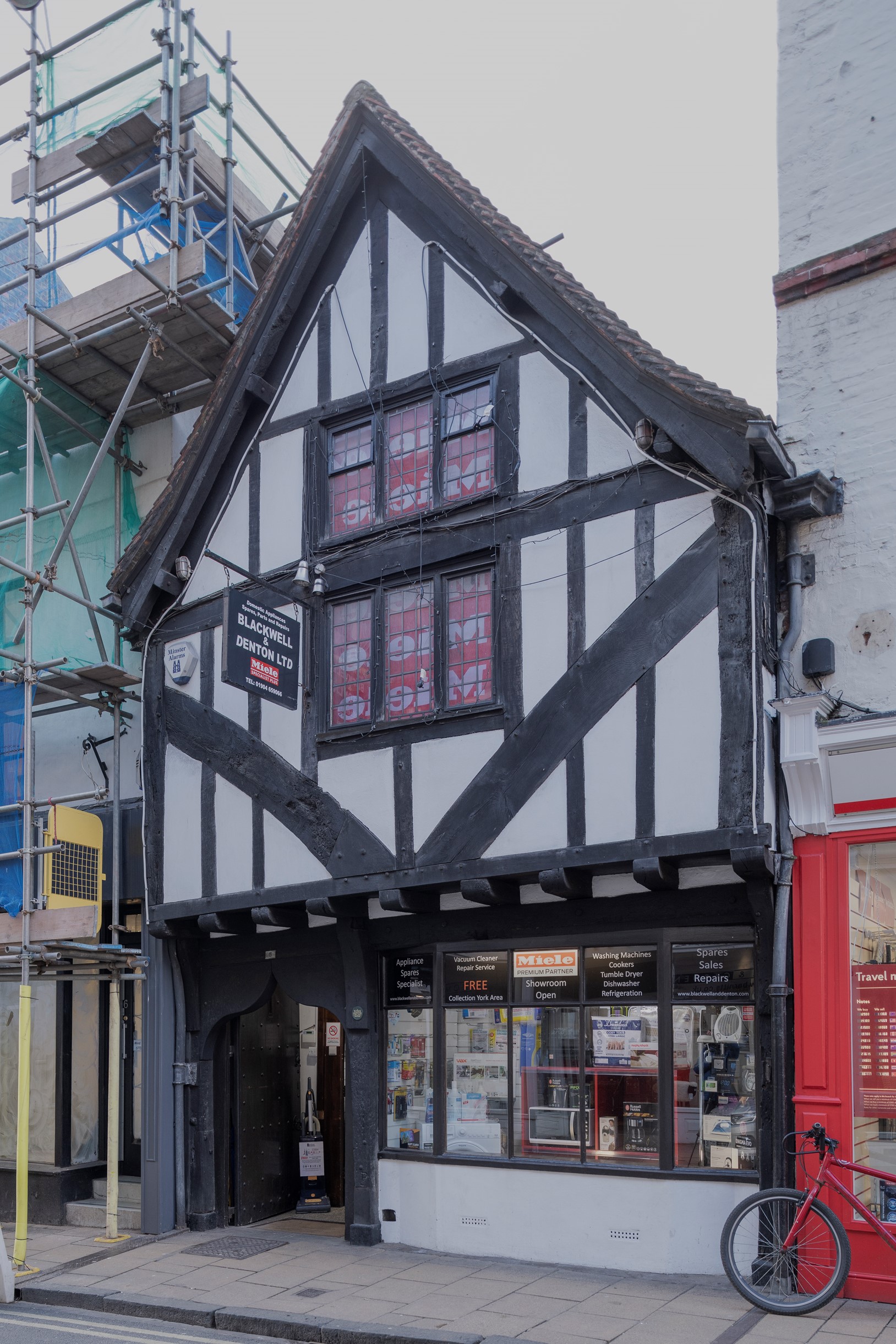 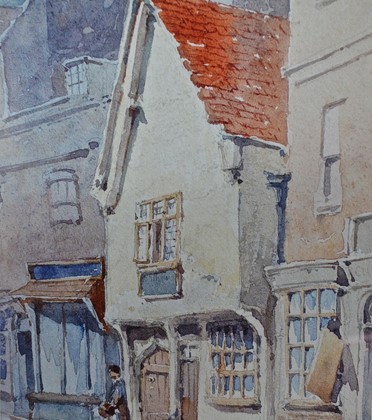 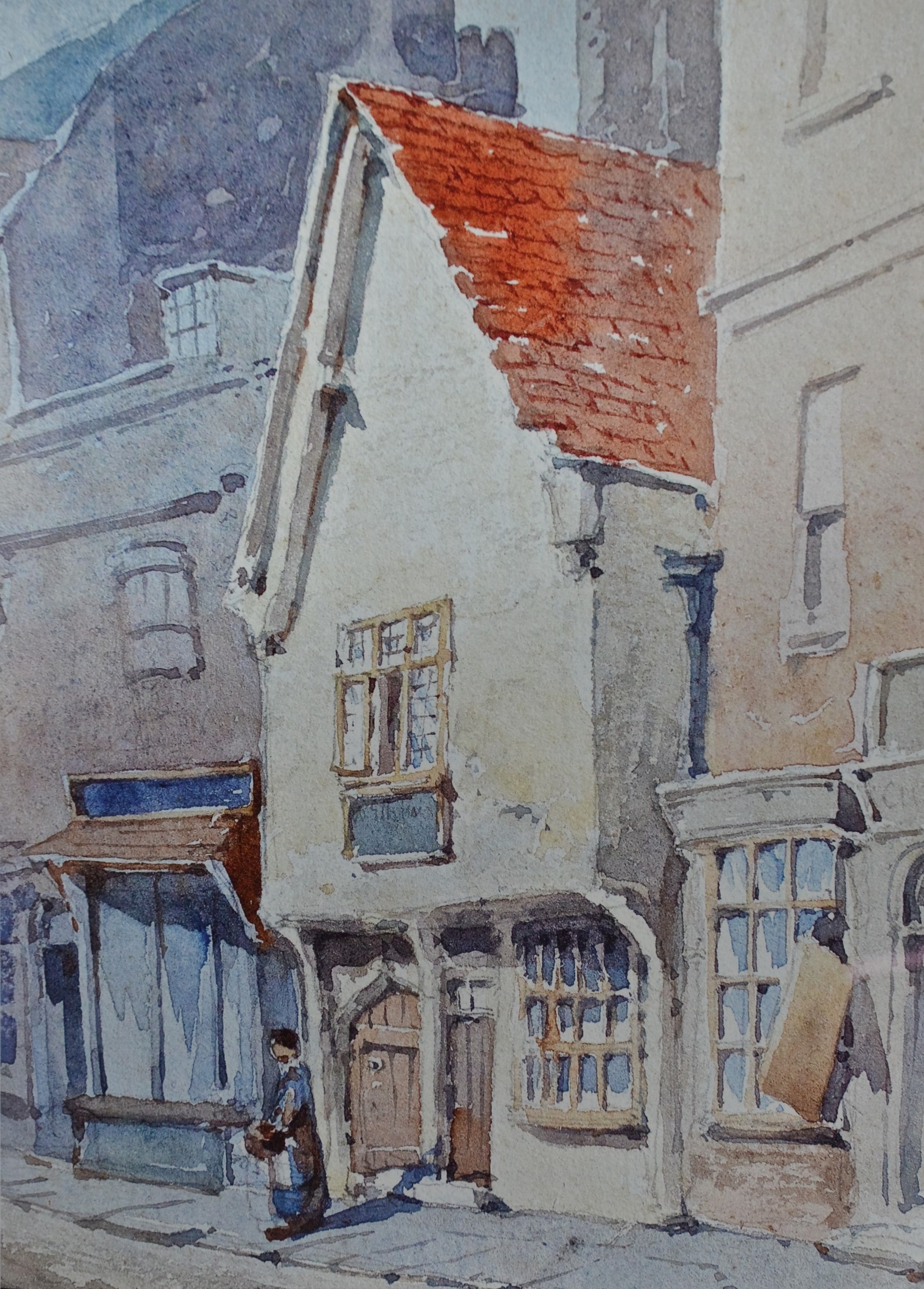 A watercolour by William Boddy c.1900 in the Darrell Buttery collection, shows, as he said ‘the building drawing attention to itself, pushing forward beyond the building line and presenting its gable-end to the street’.

5 Colliergate is a commercial premises