One of the oldest theatres in the UK

In the late 1730s, encouraged by the success of The Assembly Rooms, the City Corporation turned its sights towards establishing a permanent theatre.

Previously, plays and entertainment had been performed piece-meal by professionals including Mr Keregan’s Company of Comedians. However, it was not until after Keregan’s death in 1740, that the Corporation approached his widow to take on a lease and contribute towards the cost of a ‘New Theatre’ in the Mint Yard. The plot of land was part of the St Leonard’s Hospital site, purchased by the City from Lord Halifax in 1676. Keregan’s widow agreed and a small theatre was built behind the Red House. Opening in 1744, it was accessed through narrow snickets, or walkways, from the Mint Yard and Little Blake Street.

Over 300 years of entertainment

In 1761, a new lease was granted to the actor, Joseph Baker, on condition he spent a £500 on improvements. Baker enlarged the seat capacity to 550 and lived in an adjoining house on Little Blake Street. A few years later, heavily in debt and in poor health, Baker joined forces with Tate Wilkinson. Already an accomplished and ambitious actor, Wilkinson paid for a Royal Patent in 1769 and took over the lease on Baker’s death in 1770. For the next 30 years, Wilkinson attracted many famous actors of the day to the stage of York Theatre Royal, including John Kemble, Sarah Siddons and Mrs Jordan, mistress for 20 years to the Duke of Clarence, later King William IV.

After Wilkinson’s death in 1803, over the next three decades a succession of short leases were granted and further improvements made. In 1835, the York Architect John Harper proposed an upgrade in the form of an Elizabethan style arcade on the front of the theatre, a garden to the left, which at the time offered a spectacular view of the Minster, and three buildings near to Bootham Bar.

Some forty years on and Harper’s Elizabethan style was rejected in favour of a Gothic design by the York surveyor, George Styan; it is Styan’s 1870s façade, with very little alteration, that has survived and which you’ll see today.

Styan also commissioned the York sculptor, Mark Hessey, to carve a full-size statue of Shakespeare in ‘Oscar Wilde style’ standing above the pediment. Lower down and flanking the oriel window, you’ll find the faces of Tragedy and Comedy appearing in the guise of Hamlet and Falstaff, whilst four of Shakespeare’s great female characters: Elizabeth I, Lady Macbeth, Cleopatra and Titania welcomed Victorian audiences as they entered through the Neo-Gothic arches.

Internal alterations during the Edwardian period, partly driven by new fire regulations, saw the introduction of Art Nouveau elements to the auditoria and these designs remained largely unchanged until 2016.

Visionary architecture for the 20th century

In 1967 visionary architect Patrick Gwynne was commissioned to enlarge the entrance and allow room for much needed facilities. Taking up part of the garden area, predominately in planar glass with concrete umbrella pillars and a sculptural staircase, Gwynne created a wholly new look and focus for theatre goers.

In 2016, York Conservation Trust acquired the building from the City of York Council and, with the help of a major Arts Council grant, the interiors were significantly refreshed and upgraded, together with the Trust refurbishing the roof and catering facilities.

Today, York Theatre Royal continues its legacy of great regional theatre and plays host to a wealth of national and international touring companies. From puppetry to classical ballet, Shakespeare, Pinter, comedy and Christmas shows; take time to enjoy the regularly open café and look out for the remodelling of the remaining garden area, as an outdoor performance space for 2023. 1765 playbill for 'Julius Caesar' and 'The Cunning Man', courtesy of York Minster Library and Peter Brown. 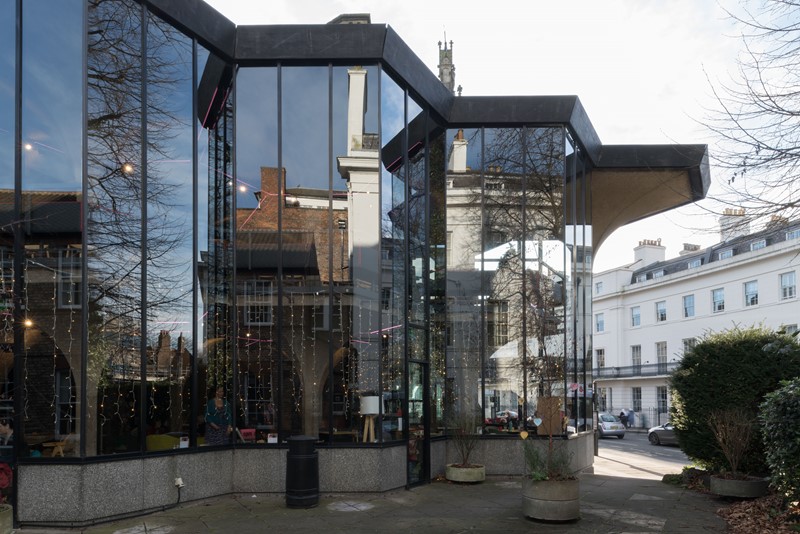 Why is York Theatre Royal significant?

The nationally-important York Theatre Royal represents a complex multi-phase structure that developed around the mid 12th-century remains of St Leonard’s Hospital. This landmark building is principally an example of Victorian Gothic Revival architecture, but one which hides elements of both medieval and Georgian architecture within. In continuous use since 1744, the York Theatre Royal is one of the oldest purpose-built continuously operating theatres in the UK, and provides important insight into the nation’s cultural, social and economic history. The building’s northern extension by Patrick Gwynne was strikingly constructed in glass and reinforced concrete in 1967, and is the finest example of modernist architecture in York.